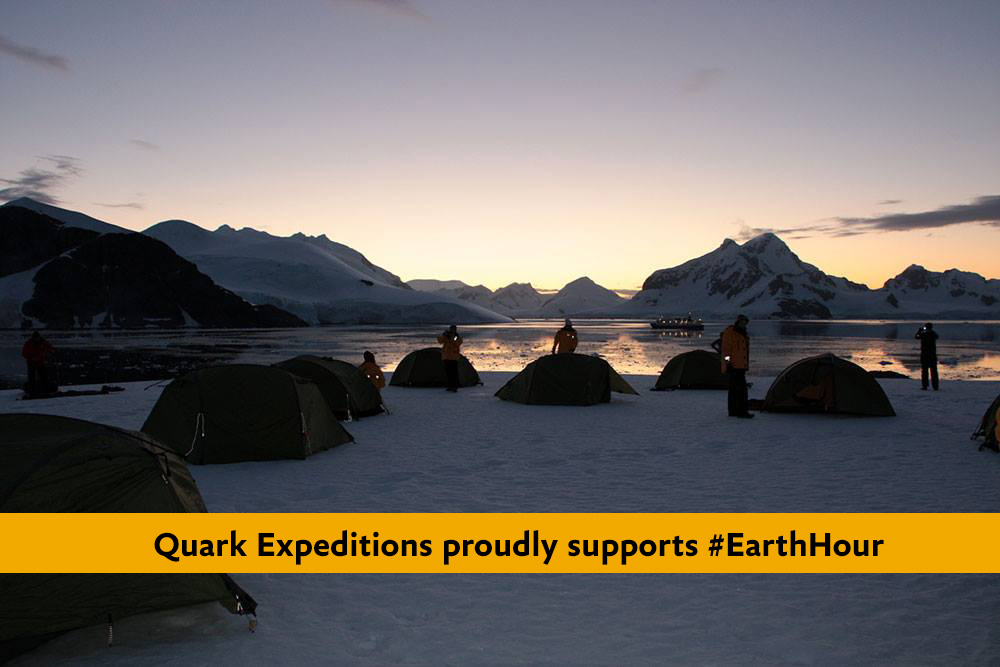 Launched in 2007 as a lights-off event to promote awareness of climate change issues, Earth Hour has grown into a global initiative with over 7000 municipalities and people from 162 countries and territories participating in 2014. This year, Earth Hour takes place March 28th from 8:30 p.m. to 9:30 p.m. local time. Through the Earth Hour 2015 Tracker, people around the globe can find and create events to help raise awareness.

Along with participating in this event, Quark has expanded its sustainability initiatives to offer carbon neutral voyages on its Ocean Nova expedition ship for Arctic 2015. In partnership with the CarbonNeutral® Company in the U.K., Quark passengers can "pay-as-you-fly" to offset 5 tons of CO2 emissions, the equivalent of 1,281 car miles or 57 trips driving from London to Paris. Carbon offsetting has been offered on Quark’s Ocean Diamond voyages since 2012. Quark Expeditions supports other carbon offsetting initiatives around the globe, including the:

Quark Expeditions supports other carbon offsetting initiatives around the globe, including the:

"We're proud to continue building on our sustainability initiatives," said Quark Expeditions President, Andrew White. "What we've learned from our passengers and staff is that they are truly polar-passionate people, who want the pristine environments of the Arctic and Antarctica protected for generations to come. We take our responsibilities as ambassadors of the Polar Regions very seriously."

A long-time, active membership in the International Association of Antarctica Tour Operators (IAATO) and the Association of Arctic Expedition Cruise Operators (AECO), Quark adheres to stringent guidelines designed to ensure the Polar Regions remain pristine for generations to come,The first polar expedition company to offer inclusive CarbonNeutral® voyages in Antarctica, Quark holds online auctions that raise an average of $150,000 per season to support sustainability and conservation charities in the locations visited.

For 25 years, Quark Expeditions has been the leading provider of polar adventure travel. With its diverse fleet of specially equipped vessels, unique land-based adventures and seasoned expedition leaders, it offers travelers unparalleled access to the most remote regions on earth: the Arctic and Antarctica. In 2013, Quark Expeditions was voted "World’s Leading Polar Expedition Operator" by the World Travel Awards™, received the "Blow the Budget" award from the Amadeus & World Travel Awards™ Travel Experience Awards and was named one of National Geographic Traveler’s for its "Three Arctic Islands" voyage. In 2014 it earned "World’s Leading Specialist Cruise Line" designation by the prestigious World Travel Awards™.