Quark Expeditions marked a major milestone today in the construction of its technologically-advanced polar vessel, Ultramarine, with a traditional launch ceremony that also honored the Brodosplit ship-building team. 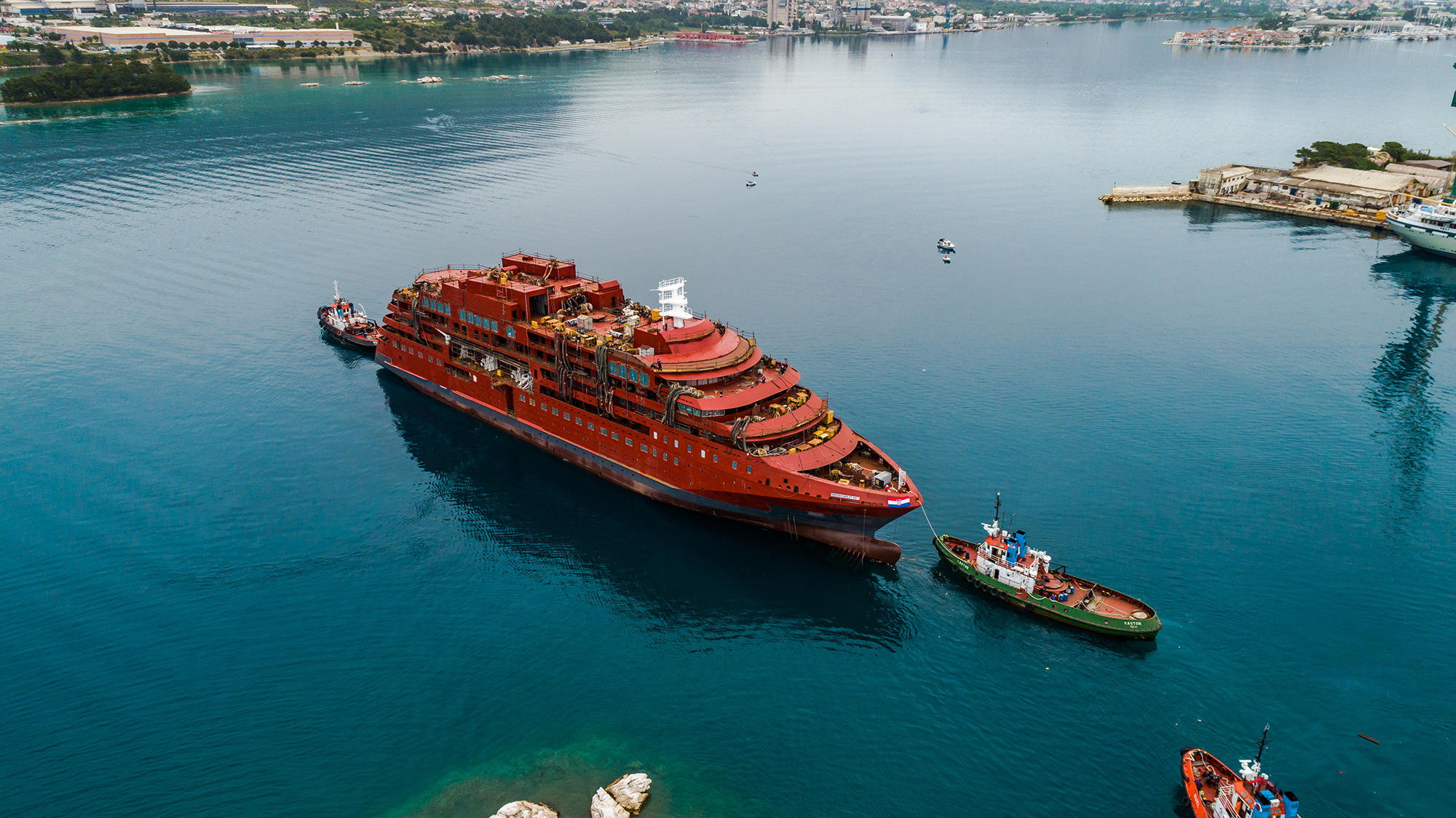 Tomislav Debeljak, owner and CEO of the DIV Group, which includes Brodosplit, the largest shipyard in Croatia, was joined by shipyard godmother Andrea Mutak (from the Split-based children’s charity Udruga Andeli—Association of Angels), dignitaries and Brodosplit employees as Ultramarine—built specifically for polar travel—entered the water for the very first time.

“Today’s launch ceremony is a time-honored shipyard tradition,” said Andrew White, President, Quark Expeditions. “That very moment when ‘ship first meets water’ is a major milestone for any vessel. The sound of Ultramarine’s hull entering the water from slipway No. 2 into Supaval Bay signified we’re one step closer to exploring the polar regions on this game-changing ship. But, of course, it’s not just any ship that we’re celebrating today—but a ship built specifically for polar exploration. Ultramarine will be an unrivalled operational base for exploring the polar regions in ways never thought possible.”

“While the star of today is Ultramarine, the ceremony also honors a cast of people without whom this vessel would never exist: the Brodosplit shipyard team,” says White. “Following a tradition that goes back to earlier times, a shipyard godmother—different from the godmother who eventually christens the ship—is chosen for this ‘working launch.’ Traditionally, this godmother has an affiliation with the shipyard community, which is important to us because today’s launch is our way of celebrating the community of engineers, naval architects, welders, structural fabricators, riggers, electricians and all of the other shipyard crew who had a hand in the launch of this expedition vessel–which will change the way we explore the Polar Regions.”

Andrea Mutak was chosen as shipyard godmother because of her work with Udruga Andeli (Association of Angels), a community organization in Split that supports children with severe physical and developmental disabilities. “It was an incredibly proud moment for all of us at Quark Expeditions as the shipyard godmother cut the rope and released Ultramarine into the waters of Supaval Bay, on the Split Peninsula.”

“The launch of any ship is complex and once underway, uncontrolled until the vessel is attached to tugs standing by,” says Malcolm Ellis, Senior Vice-President, Operations for Quark Expeditions. “The total time involved from trigger release until the vessel is stopped in the water is little more than a minute or two. Yet, the potential for damage in that time period is greater than at any time during the ship’s many years of service. The stress placed on a vessel during launch is probably the highest it will experience in its lifetime. No rehearsal is possible.”

The 199-passenger Ultramarine features two twin-engine helicopters, 20 quick-launching Zodiacs, the most robust portfolio of off-ship adventure options in the entire industry (including heli-skiing, alpine kayaking and heli-hiking), superior onboard comfort and unparalleled amenities (including a sauna with floor-to-ceiling windows that look out onto the polar landscape), spacious spa-inspired suites, advanced sustainability systems, and a unique interior design that keeps guests connected to the breathtaking polar landscapes outside while they relax inside. Guests will enjoy breathtaking public spaces and more outdoor wildlife viewing spaces than other expedition ships its size.

About Quark Expeditions: Specializing in expeditions to Antarctica and the Arctic, Quark Expeditions® has been the leading provider of polar adventure travel for three decades. With a diverse fleet of specially-equipped small expedition vessels and icebreakers, it offers travelers unparalleled access to the most remote places on Earth. Led by passionate and seasoned expedition teams, including scientists, naturalists and researchers, the onboard program focuses on guest interaction to educate and enrich the passenger experience. www.quarkexpeditions.com

About Travelopia: Travelopia is one of the world’s leading specialist travel groups. A pioneer in the experiential travel sector with a portfolio consisting of more than 50 independently operated brands, most of which are leaders in their sector. From sailing adventures, safaris and sports tours, to Arctic expeditions, each brand is diverse and focused on creating unforgettable experiences for customers across the world.